Why I Love a Window Seat!

For most of my adulthood I've flown to the US every couple of years, and I always try to get a window seat on the right side of the plane, in order to get a decent view of Greenland, the tip of which transatlantic flights usually pass over. I hadn't been there for a few years, so was pleased to snag a suitable window seat on my recent flight to Los Angeles, on the way to Hawaii. Part of the fun of these journeys for me is to retrace the flight path by matching the photos I've taken to Google Maps. Sometimes this is pretty straightforward - for a start I have a fair idea of the route from the occasional peak of the flight map between films. Sometimes, though, it is a downright painful exercise, especially if I've only taken a couple of photos every couple of hours. The quality of the photos is never that great, as I'm generally in the back of the plane behind the vapour trail, so shooting downwards gives the clearest shot (but pretty difficult with a bulky DSLR and a long telephoto lens).

On this recent trip I managed to figure out where all of the photos were taken, and I found some pretty interesting geology and some areas with many, many meandering rivers that all look the same. It was a lengthy job, but I'm a bit weird and I enjoyed it very much!

First shot is taken flying over Skye - I can just make out the lighthouse on Neist Point below. 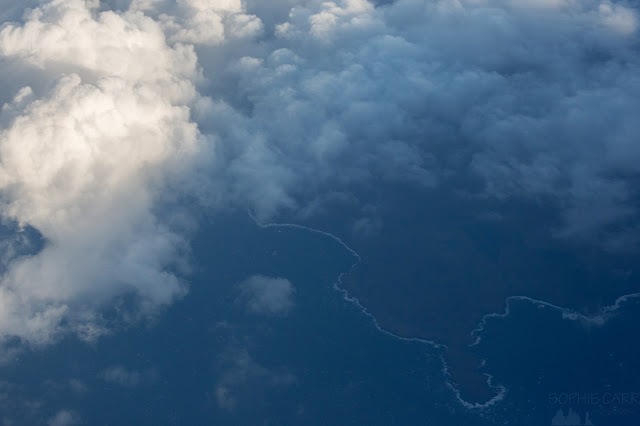 The next photo I took had a bridge in it that I didn't recognise. I knew it must be somewhere in north-west Scotland, and a couple of Google searches for "bridges connecting islands in the Hebrides" showed me a bridge from North Uist to Berneray - a little island I'd never heard of before. 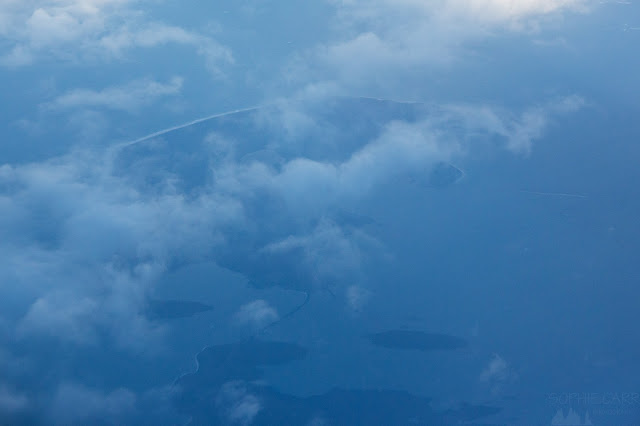 We left the British Isles behind and headed up to Iceland. Sadly there was constant cloud cover as we passed along the island's southern coast. I watched a movie instead. Three hours after take-off I did a little check out of the window and saw the bright white of the snow-covered south-eastern Greenland coming into view. We flew over an area at the bottom point of Greenland that has no settlements on the eastern coast, the Kujalleq province. What it lacked in settlements it made up for in stunning peaks, the shadows of which were long and pointy in the morning light. I'd missed the pink light of sunrise, but it was still bloody spectacular!

The last peak I saw in the main range on the eastern side was almost directly beneath us - I do have to slightly contort myself to capture these (and put the shutter on silent so as not to irritate everyone around me).

There were a few small mountains peaking out from the ice sheet as we crossed to the western side, but the eastern side was far more dramatic. The ice was occasionally broken making interesting patterns.


There was a huge glacier to the north, but sadly the vapour trail was totally obscuring the view (here it is anyway - this is what I was up against!):

I continued my marathon movie-watching session (I got through 5 films as well as taking numerous photos!), and an hour later we hit the coast of Labrador and the Torngat Mountains National Park in Canada.

Next photo was taken of a cute little river junction on the George river in Quebec - the islands reminded me of an owl's face.

A little further west and there was another impressive partly-frozen river snaking its way through the Quebec countryside below - the Koksoak river.

Half an hour later I checked the view again and we had just reached the eastern coast of Hudson Bay and a string of snow-covered islands - this one is Curran Island.

Forty minutes later I checked again (thankfully BA has proper entertainment systems so you can pause your movies at will!) and down below was a snowy meandering river. I cannot tell you how satisfying it is to find these rivers on Google Maps.

An hour later we had left Ontario behind us and were over Winnipeg in Manitoba Province. Suddenly there was flat snow-covered farmland, and more meandering rivers and oxbow lakes (I love a good oxbow lake!).


The next two shots were the ones that foxed me the most. I pretty much knew the route now, so it was just a question of finding the individual things on the map. It had been cloudy for a while, so no photos were taken, but eventually it cleared and I took a couple more shots. When I worked out the location of the second photo below, the first was easier to find. I thought that the big lake must be the shores of Lake Sakakawea in North Dakota, over the border in the US, but I just couldn't find an exact geographical match. I eventually worked it out - the angle was different from what I expected - as the quality is so poor I deduced that it must have been taken from further away.

It was an hour later when I opened the shades again and noticed some more wonderful meandering rivers (there are clearly quite a few in north America!). By now we were over the Green River in Wyoming, near a town called Farson. I located this river as the next shot was of a rather odd reservoir, taken a short time later.

I zoomed in on Google Maps and found the name of this weird-coloured reservoir that we passed almost directly overhead (hence the terrible photo!). I've Googled it and can find nothing about it, other than its location, which is a bit odd...

Forty minutes later and the snow was gone, and below was the rocky, desert landscape of Utah.

Not far away and we were over the border of Nevada and flying over Virgin Peak and the Virgin River. In 2005 I did a road-trip from Denver to Las Vegas and would have passed very close to here, a little to the north!

Next view was of the massive Lake Mead. First I could see Echo Bay, part of the Overton Arm. When we were flying over it I thought it might be Lake Powell, but that's much further east.

The next thing that caught my eye was over the border in California, a couple of huge black lava fields in the middle of the desert. I believe the one on the right is called the Pisgah Lava Field (there are some tubes marked on the map). Love lava!!

We flew over some more desert scenery - would love to have been down there exploring. This is near Johnson Valley, California.

Soon after the desert disappeared and we were back over green hills again, which is dotted with quarries and ski resorts.

We were getting close now to Los Angeles, the end of the first leg of our journey. The suburbs began to be visible, and the cloud cover grew, but I was surprised to see a snowy peak sticking above the clouds. The suburbs sprawled out forever, with areas of housing, massive factories, golf courses...

Eventually the skyline of Downtown LA came into view, although for the remainder of the journey the buildings were mostly obscured by the pesky vapour trail. This is the clearest shot I got of the skyscrapers - fairly rubbish!

Last but not least was the Hollywood sign, perched up on the hills behind the enormous city. Again, an awful photo - the vapour now well and truly ruining all my photos as we descended! The only option was to shoot as far down as possible. I managed to locate the streets below in Gramercy Park, the last part of this rather ridiculous task!

And here is the whole route, to tie it all up. It may seem a bit weird and obsessive, but the geography of our world is incredible and diverse, and there's really no better way than to get an idea of this scale from the air.